The Exiled, the sandbox MMORPG and MOBA mashup from Fairytale Distillery, officially entered into Season 2 early this morning. Along with the new season comes a trove of updates from the developers, many of which have addressed feedback from their Early Access players via Steam.

Since its release for Steam Early Access on February 23rd, The Exiled has been offering free one-week trials to anybody who is interested in playing the game. This has proved valuable in terms of providing feedback from an early base of players, and the developers have released Update 1.1, to coincide with the beginning of Season 2.

The major implementation of the new update is the addition of a support class. Players can choose the Healer armor class to gain powerful abilities to buff and sustain their friends, party members, and clan members. The new class also introduces new link abilities into the game. Since the Healer is just an armor class, players can still choose any of the weapon classes available in the game to augment their own style of play. 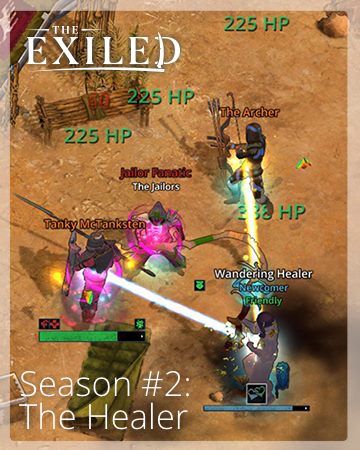 The ability to form parties at all is also a new feature in The Exiled as of this update. Previously, players could band together in clans, but now, parties will offer a more loose, temporary sort of relationship with others that you encounter in the game’s forsaken valley. The developers have also added a camera lock mode, which will center the camera on your character regardless of mouse movement.

The update also includes a number of bug fixes and performance improvements, both to the game and the game’s servers. New players can continue to take advantage of the one week free trial offer to test out The Exiled. If you’ve already used your one week free trial, and are holding off on purchasing the game outright, Fairytale Distillery is also offering an additional two days so that players can try out the game again now that the update has taken effect.

Be sure to head over to the Steam community page for full details on this new update. Check out our review of The Exiled from Early Access, and head over to its Steam store page to learn more and try the game yourself.