After the first day of the Group Stage of the League of Legends Mid-Season Invitational in Brazil, SK Telecom T1 has solidified their position as reigning champions and team to beat, by being the only team to win both of their Day 1 matches. Meanwhile, Flash Wolves, despite dominant matches in the Play-In stage and their victory at the Katowice earlier this year, finds themselves the only team unable to win a single match. 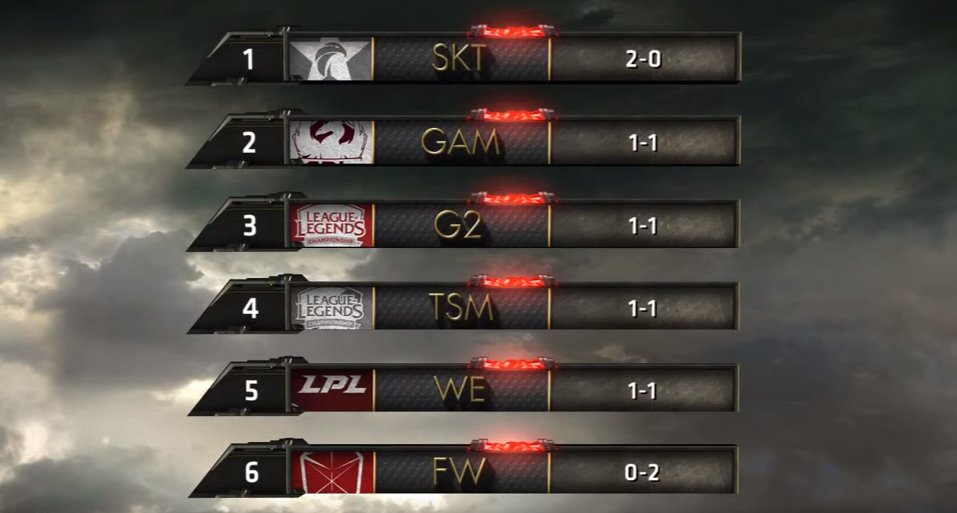 The standings after Day 1.

Not surprisingly, SK Telecom T1 showed their trademark clean play and fancy moves, securing victories over EU’s G2 Esports and the GPL’s GIGABYTE Marines. GAM did find revenge, however, by defeating NA’s Team SoloMid in a bo1 after TSM’s reverse sweep victory in the Play-In Stage. Their aggressive play style proved too much to handle for TSM, who strangely decided to go with a protect the ADC composition, running WildTurtle on Twitch and even putting mid-laner Bjergsen on Lulu.

But TSM was able to fight back against the LPL’s WE in the final match of the day, winning a very close-fought match that seemed liable to go any way at any point. It was Hauntzer’s Kennen in the top lane that proved extremely valuable in the match, as the North American native was finally able to play to his usual domestic level on an international stage.

Despite a good deal of hype, the LMS’s Flash Wolves found themselves falling to both G2 Esports and WE on Day 1. If they hope to repeat the dominant performance they had at IEM Katowice earlier this year, they’ll be looking to make a comback on Day 2, when they face off against GIGABYTE Marines and TSM.

Perhaps one of the most exciting performances on the day came from WE’s top laner, 957, who played Kled in their match against Flash Wolves. Despite not being the most hyped player on his team, 957 was able to end the game 7/0/4 and somehow survived in a 1v3 matchup at 26 minutes while almost taking out the opposing top laner MMD.

Tune in tomorrow for Day 2 of the League of Legends Mid-Season Invitational 2017 via Riot’s official Twitch channel.

Rumble, The New Rocket League Mode Is Out