In this weeks addition of Spider-man/Deadpool, our favorite web-slinger got another upgrade in his wardrobe. The new costume that Spiderman dawns (To ally himself with Deadpool) is mostly black, much like the symbiote suit. Only it has a red logo on the front and the back, red eyes, an apparent hourglass on his hands which also have been converted into talons. I find this look to be much more sinister looking which I think is necessary considering who he’s teamed up with. 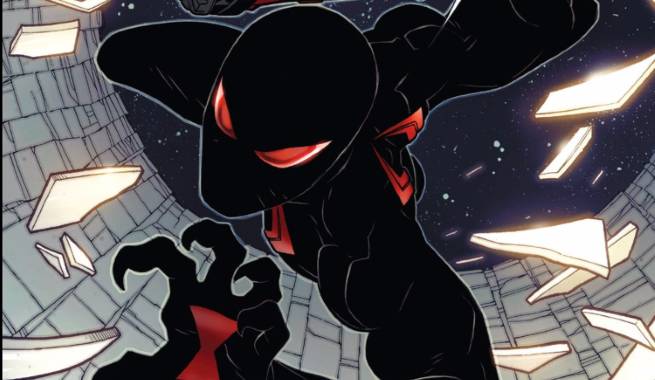 Spider-man had picked up this costume after he had died briefly (and then returned) and found someone masquerading as him.Whats important about this is that while Peter was dead the writers delved more into the deal that he made with Mephisto; which was made to save Aunt May’s life in exchange for Peter’s memories and love for Mary Jane Watson, his wife. Although not actually telling Peter about the deal Mephisto taunted and hinted at what happened to him.

An interesting thing about this comic so far is the way they’ve stayed consistent despite the unpredictable nature of Deadpool. The writers do a great job of keeping the story current in both of these very popular characters timelines.